in this article, I will guide you and show you the best Android emulators you can use for Gaming Android games. These Android Gaming emulators can equ 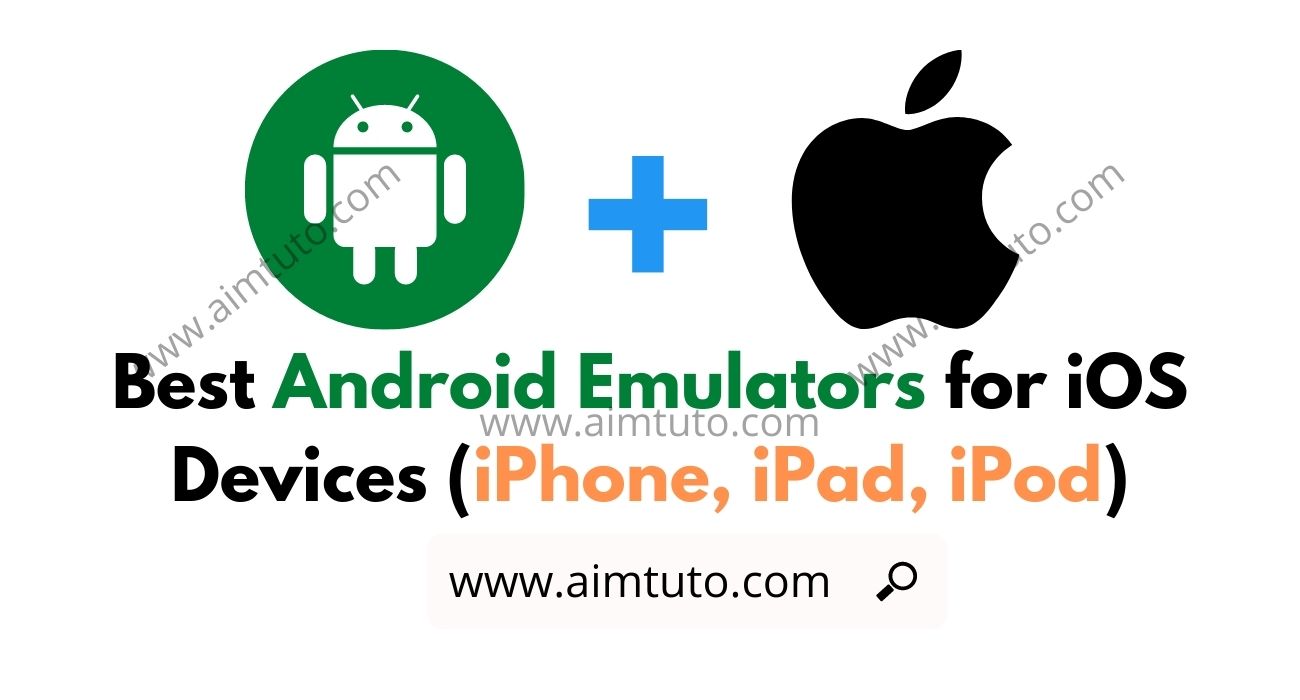 There are many Android Apps or Games that unfortunately, are not available for iOS (iPhone and iPad) and sometimes hinders us from carrying out certain activitites especially for developers and debuggers. Here comes the role of an Android emulator that will help us simulate Android Apps and Games that may not be available in the Appstore on our iOS (iPhone and iPad) devices.

Emulators are of many kinds and some are specific for gaming or jus for simple usage. It is to note in mind that it is good to know the best Android emulator you can use for your project. So, in this article, I will guide you and show you the best Android emulators you can use for Gaming Android games. These Android Gaming emulators can equally be used to simulate Android Apps on your Android Device.

There are just an uncountable number of Apps available for Android but not for iOS and that you will love to run them on your iPhone or iPad is that right? Well this can only be done by using an Android Emulator for iOS.

An Emulator is hardware or software that enables one computer system to behave like another computer system. An emulator typically enables the host system to run software or use peripheral devices designed for the guest system.

When talking of an emulator, we usually have at least 2 involved; A Host system and a Guest system.

A Host System is the system that will simulate the Guest system.

A Guest System is the system that is being hosted or carried or contained by a Host system.

These two system types work in synergy and a guest system can't actually run without a host system.

There are many types of emulators; we have Android Emulators, iOS emulators, PPSSPP Emulators, and many more. There are emulators for all device types.

Though there are many types of emulators, we are interested here in the android emulators for iOS (iPhone and iPad).

An Android emulator is simply an emulator that virtualizes or simulates a android OS (guest) of a particular version on a host system. This emulator provides all android features supported by that Android version on your host device. The host here can be an iOS, Windows etc...

Why You Should use an Android Emulator on iOS

6 Best Android Emulators for iOS (iPhone and iPad) No Jailbreak

You can find below the 7 best Android emulators for iOS that you can use to simulate your favorite Android Apps and Games on your iOS device.

Recently, iAndroid has been blowing up on its usage and has gained a wide terrain of users. So, it comes first as Android emulators for iOS.

There are many other emulators coming up but we've spotted out these 7 which are the best android emulators for iPhone and iPad that you can use to simulate Android OS on your iOS device.

iAndroid Emulator is presently the most leading and best android emulator for Apple iOS devices such as iPhone, iPad, or iPod Touch.

With its excellent user friendly interface, iAndroid Simulator makes it easy for users to work with this android emulator easily and get android functionalities on their iOS Devices.

iAndroid was launched officially for use in the year 2011, to help iOS users to run their favorite android apps on their iPhones or iPads.

NOTE:
You can install iAndroid on both a Non-jailbroken and Jailbroken iPhone devices.

Features of iAndroid Emulator for iOS

How to Install iAndroid Emulator

If you are in search for an ideal android emulator for iOS with extremely incredible customization then, Alien Dalvik Emulator is the Best Android Emulator for you and your iOS device.

Alien Dalvik Emulator works well on iPhones and iPads without any malfunctioning or bug.

How to Install Alien Dalvik Emulator

NOTE:
Apple can disembark the Android Emulators for iOS at any time. And if the app crashes, re-download, re-install following the whole process to use the Android emulators on your iOS device. It makes the android platform look so real, like a visual studio. Don’t use a desktop browser to open the source site. Open it just on your iOS device in safari browser.

GB4iOS is a well known emulator for iOS that can be used to play many console games right on your iOS device.

GB4iOS is ideal for those looking for an Emulator for gaming on iOS.

It allows its users to download ROM files from the safari web browser and import it directly to the emulator.

Plus, you can sync and connect GB4iOS with Google drive which is ideal for storing and accessing your files.

The GB4iOS is amongst the top-notch emulators for iOS and other devices. Advised to used a machine with 2GB RAM and above to enjoy faster and smooth game plays with clean graphics quality display.

This Emulator is mostly used by gamers wanting to simulate a wide range of console games on their iPhone and iPad devices.

How to Install GBA4iOS

Apple has removed this emulator from the store so the only way to install it is by using external sources. Follow the different methods below.

GBA4iOS emulator is now fully functional on your iOS device.

Note!
You will Require the GBA4iOS .ipa file alongside Cydia and also a valid Apple ID to be able to get this emulator installed.

Obtained from NDS4iOS, iNDS emulator is one of the worldwide known best Nintendo DS emulators for iOS.

It has features that permits iOS users to play Nintendo D games right on their iPhones, iPad, or iPod without any stress.

All the previous other versions of iNDS were functional just on jailbroken iOS devices but now, an update was released, you can enjoy the best Nintendo games on your non-jailbroken iPhone device.

How to Install iNDS

NDS4iOS is a popular iOS emulator and the best Nintendo DS emulator for iOS devices. This emulator is mostly used on iOS 7 and iOS 8 devices.

However, the recent update on the NDS4iOS emulator for iOS made it fully compatible with the iOS v9.

The emulator works best with games like pokemon with excellent graphical quality and unprecedented speed.

However, unluckily for us, the Apple store has revoked thee NDS4iOS just as the GBA4iOS is withdrawn from the App store.

A really sad news which will bring us to really difficult steps that we will have to follow to get the emulator from other sources.

Hopefully, we have brought you some simple steps for the installation of this emulator. Follow the methods below;

Note!
If the NDS4iOS shows a red button mark beside it, then you can't install the app. You will have to try the other methods below.

Use TutuApp when all the other methods don't work for you. TutuApp is an excellent alternative to App Store and you can get paid games and apps for free at TutuApp.

TutuApp contains several tweaked apps and many emulators you can use.

ApowerMirror is a wonderful professional mirroring software application that simulates a guest system in a host system. An update to this app made it possible for iOS users to simulate their Android OS screens right onto their iOS devices

You will be able to play and run any app or game on your iOS device with ApowerMirror but for this to work perfectly, the two devices need to be connected to the same Wi-Fi network.

How to Install and use ApowerMirror

Once the connection between the 2 devices is successful, you will be able to view your Android screen on your iOS. Also performing any manipulation in the cast will remotely manipulate your Android device.

Note!
Press the home button to switch back to the iOS device and use the functions of the iOS interface. However, keep Apower mirror running in the background.

How to Run Android Apps on iPhone Without Jailbreak

You can do many things with your iPhone without Jaibreaking it. Android has a great world of apps and games to offer which iOS doesn't have. For that reason, you will need an android emulator to run android apps on your iPhone or iPad device.

Now the question to ask is; Is it possible to run android apps on iPhone or iPad without Jailbreak? Yes it is even very well possible thanks to the use of Android emulators for iOS (iPhone and iPad).

Some few more android emulator for iOS on this page will do the job as well. However, you recommend you to choose an emulator based on its specifications and iOS versions it's stable with.

After reading this whole article, you can now see that it is possible to run Android Apps and games on your iPhone or iPad devices. Emulators are in categories based on what they support and can carry. We have given you the best Android emulators you can use to simulate your apps and games for free.

We mentioned gaming emulators for iOS and you might be wondering if these emulators can be sued for games. Yes they can be used for games and some are really specific for gaming with. We have covered that just below by giving the best Android emulators for gaming on your iOS device.

It is equally important you know of the best android emulator for gaming on iOS.

Let's cover some little questions asked by some people online that can be equally helpful for you.

Graphic Designer, Web Developer, Ethical Hacker, Programmer, Content Creator is what I am and over all a Biochemist with an aim of bypassing all restrictions that separate me from my objectives.
#Android Emulators #Essential Tutorials #iOS