Once the window opens, type in regedit and hit Enter. A next Window will open. After you must have created the key GMM, it will appear like a folder.. 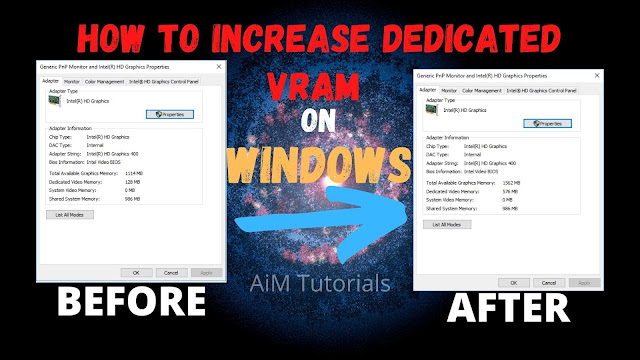 Normally, good PCs are the ones with good processors because this is the property that helps detects the speed of executing tasks and the number of tasks that can be executed at a time on a particular PC. More so, Graphics not last, play a quite important role on a PC especially for gamers and graphic designers. This  is the property that give a real time display of the running task on a PC. Depending on the graphics type an manufacturer, there are really good graphics cards providers such as Nvidia, AMD/ATI Radeon that provide really good graphics. More so, Intel isn’t to be neglected too.

Getting these graphics cards or upgrading your graphics cards for a better one can be really expensive. Not everyone can afford for them. At the end of this post, that wouldn’t be a problem for you for you will know how to increase or upgrade your dedicated VRAM to the next level.

What is VRAM in a Graphics Card

Each capitalized letter in VRAM stands for something. ‘V’ in VRAM stands for Video and ‘RAM’ stands for Randon Access Memory. RAM is a random memory that stores the ongoing information running on PC temporarily and can be cleared off when running programs consuming it are closed or when PC is restarted. This RAM is known for increasing the speed of programs and reduces the load time but when in comes to graphics power that is the efficiency and effectiveness of a PC to optimise the display of programs on PC, then VRAM is the boss.

VRAM is a type of Random Memory found in graphics cards and that has the same function as RAM on PC. Like the RAM on PC, the higher the VRAM, the stronger and ore powerful the graphics will be. That’s why people keep searching for methods to increase this VRAM but search no more, in this post, you will get the solution to that worry. I will be showing you how to increase VRAM without entering the BIOS.

Most common methods for this that we find online require an access to the system BIOS. Not everyone is technically set for manipulating in there. So you might upset something that my brick your system currently installed on your PC. So I will be providing you a method that won’t require you to enter the BIOS.

So, the method for this inquiry is as follows;

Before we proceed, let me show you the actual VRAM I got on my PC. You can see it in the image below, I got 128MB as initial VRAM. 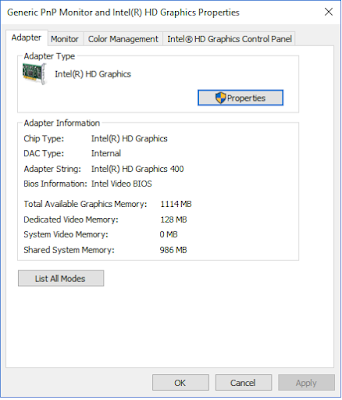 As you can see above, I have 128MB as actual VRAM. So I want to increase it to 576MB. How do I do that? Well just follow the steps below.

Step 1: On your PC desktop, hit the Win + R keys together and you will get a windows similar to that below. 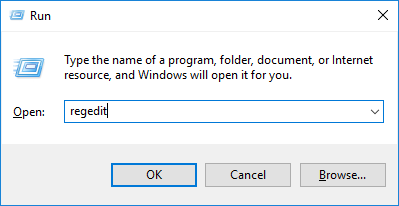 Step 2: A next Window will open and it will look similar to that below. You will need to do some navigations as you see in the Screenshot below.  Follow the following order to keep the track. Navigate to HKEY_LOCAL_MACHINE >> SOFTWARE >> Intel. Note this Intel here is my graphics provider so your own graphics provider can be different. So don’t worry if you see a different name there but make sure it corresponds to a graphics provider like Nvidia or AMD. Right click on Intel and create a new key then name it GMM. The steps are simplified in the below screenshot. 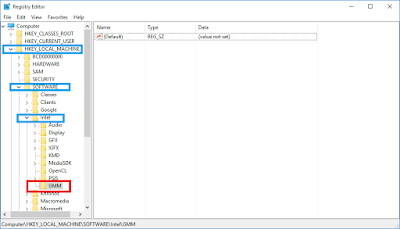 Step 3: After you must have created the key GMM, it will appear like a folder. So click on it and on the right side, you will see an empty space. So right click on that space and select New then create a new DWORD Value. based on your computer, you might be running a 32bit or 64bit processor. So make sure you choose to create the DWORD Value, corresponding to the processor type running on your PC. In my case, it is 64bit so I choose to create a 64bit DWORD Value then name the file DedicatedSegmentSize without spacing the words and capitalizing each of the first letters of each name. See the screenshot below. 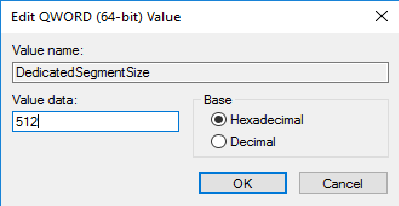 Now restart your Pc and you will notice a change in the Dedicated VRAM. You can see that in the below screenshot. 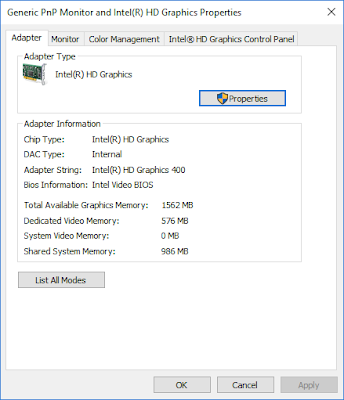 Is this method of Increasing VRAM on Windows risk free?

Yes, you dont run any risk and your PC doesn’t neither as long as you follow the steps as shown and you take not of the notice after the step 4. You can revert this changes by deleting this key though some system registry files will be already attached to the increase, just restart your PC and all will be good.

Nevertheless, its always good to do a backup of your registry files before editing them because these are files that control your PC’s functionality. A method for backing up registry will soon be uploaded so be patient and subscribe to this blog to get notified when its done.

Can this method on increasing VRAM without BIOS work on windows 10?

Yes, this works perfectly on Windows 10 and doesn’t require to much to get done. just follow the given steps and you’ll be okay to go with the increase of VRAM without BIOS.

Is Increasing VRAM on Windows Stable?

Yes, unlike other methods, this one is quite stable. Nevertheless it can be unstable when you install windows updates on your system for this clears the modified system files.

This is a real, fast and good and stable method for Increasing VRAM on any windows PC. Use it an get working with your PC at maximum state taking into consideration the Total Video Memory and processor.

Graphic Designer, Web Developer, Ethical Hacker, Programmer, Content Creator is what I am and over all a Biochemist with an aim of bypassing all restrictions that separate me from my objectives.
#Essential Tutorials #Increasing VRAM