YooMee Cameroon free internet with high speed, step by step method for stabilizing the trick and ways to improve the free internet speed.

This is practically the first internet trick on YooMee Cameroon we are publishing on this blog. YooMee Cameroon has had a common VPN available for all platforms that works pretty good since some years ago. The difference is this VPN has become slow over time as the developer limits the servers speeds and kept the increase just for members who pay for the speed upgrade in a form of Psicash. This Psiphon speed is determined by Psicash which is a speed protocol integrated by the developer. 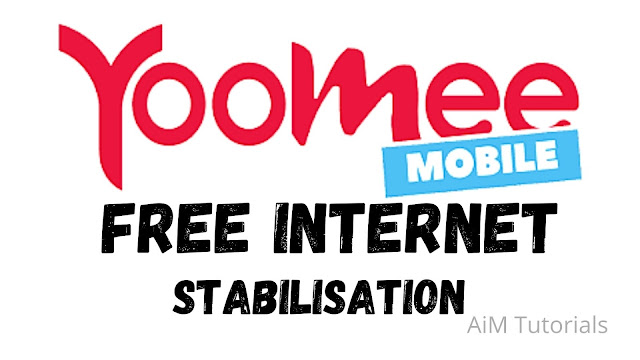 Psicash determines the speed of Psiphon client used by a specific user over the Psiphon servers. Psicash was introduced in Psiphon to have a means of keeping their servers alive. So Psiphon isn’t that fast now for users that don’t have the means to pay for Psicash. That’s why we aim at bypassing these restrictions and revealing the method to our readers. In today’s article, you will know how to get a stable free internet connection with YooMee Cameroon.

What is free Internet

Free internet is briefly defined as a set of protocols and rules used by a given user to connect to the internet for free due to a PIN up on the server of a given and targeted network providers. These protocols include VPN, SSH, Proxy and many more. Getting this free internet is not just simple and easy as you think because, scans and exploits are to be done on vulnerable host that is susceptible to get exploited. In most cases, we won’t need a host to get connected to the internet. A Psiphon client will just get the job done and connect us to the host. Psiphon mostly makes use of proxies to bypass restrictions and get any user connected to the internet.

Psiphon is available both on Android, IOS, and PC. You can download Psiphon for these platforms at the end of the post. There is another similar software to Psiphon that works with the same mode as Psiphon. We have K-phon and K-Phon Mini.

How to get Free Internet with YooMee Cameroon

Psiphon is the common way of getting free internet with YooMee Cameroon. In the past years when this VPN wasn’t yet paid, the speed was really great and every body was happy using this VPN free. Now the VPN is paid and you can’t just use the VPN for free. So, we imply some external method which includes the use of K-Phon Mini for faster internet speed. It doesn’t just end there, we will need to enter some specific proxies that will make the internet stable and clear. Now what is Psiphon and K-Phon Mini?

What is Psiphon VPN?

Psiphon is an open source source circumvertion censorship tool that works on a base of protocols of which VPN, SSH and Proxy are the top and most used protocols of this software. Psiphon is totally free to use. It is just paid at the level of the server speed which makes the internet connection even faster. Psicash is what determines the speed duration of the sever. The more the Psicash, the higher the internet speed and the more this speed will last. How can you get unlimited psicash for free? Check the method below on how to get unlimited psicash for free.

CHECK OUT: How to get Unlimited Psicash for Psiphon for higher connection speed

The method is quite simple as that we once released on our Telegram Channel. Join our Telegram Channel Now. Some modifications were brought to that method and include some proxies that will be inserted in both of the application. So, to get started, we will need some requirements which are listed below.

You will have to download the two softwares listed above before proceeding. These two softwares work in synergy and the second is known for stabilising the injection to the server. Follow the steps below.

Step 1 - Configuring and Connecting Psiphon: Once you download Psiphon, launch the it. Once on the dashboard, go to the Settings >> Upstream proxy >> set the port to 1997 and proxy to 127.0.0.1. The essence of this is to tell Psiphon, which port he should connect to and avoid wasting time checking other ports for connection. Set the country to Japan or let Psiphon choose a better country for your location. Then click connect and Psiphon will connect within some seconds.

Step 2 - Configuring and connecting K-Phon Mini: Download K-Phon from the link above and launch the software. Go to the Settings tab and set it up as follows;

Now head back to the Home tab and click connect and wait for K-Phon Mini to connect.

Note: Psiphon should already be connected before you launch K-Phon Mini connection.

Psiphon speed is really slow and unstable due to the speed allocated to the free server. So the more Psicash you have the faster your connection will be. No one will like to buy for Psicash all the time so that's why we worked over this method to improve this tunneling speed. This is where K-Phon Mini intervenes. K-Phon Mini connects to the tunnel on which Psiphon already runs on and with K-Phon Mini fast servers, it redirects the tunnel connection to it's own servers and thus, increasing the tunneling speed and bandwidth.

Once these two softwares are connected together, you will notice a great change in your connection speed and you can even download at better speeds. Below is an image of the two injectors connected at the same time. 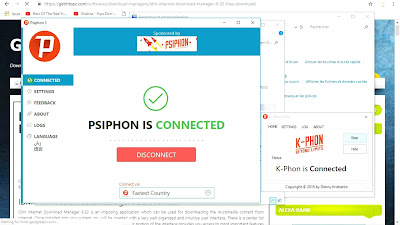 Step 3 - Configuring PC proxy settings: Your PC might be connected to the tunnel but for some people, they won't be able to get a proper connection in the browsers and download manager. To fix this, get to your PC Settings and go to proxy settings the set the proxy to 127.0.0.1 and port to 1997. This will automatically pass the tunnel connection to the PC application including the browsers.

On AiM Tutorials, we always aim at sharing our knowledge with others who can't afford for it because sharing is caring.

Graphic Designer, Web Developer, Ethical Hacker, Programmer, Content Creator is what I am and over all a Biochemist with an aim of bypassing all restrictions that separate me from my objectives.
#Free Internet Tricks #YooMee Cameroon Free Internet