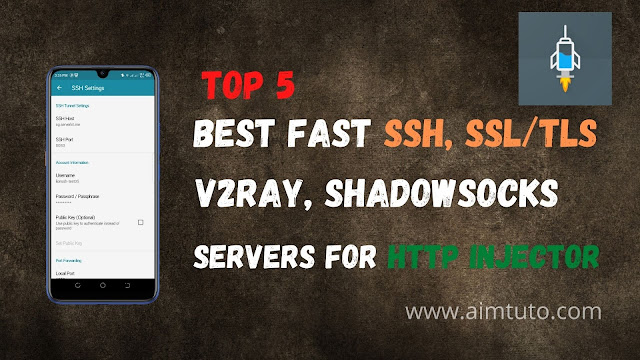 When ever we are creating configs files with HTTP Injetcor, one of the most important parts is the choice of the server. Failure to choose a good server for our requested connection will result in no connection results and handshake failure between the server and the client.

So in today's article, I will give you the best SSH, SSL/TLS, V2Ray, Shadowsocks Severs for fast and stable speed with HTTP Injector.

What is SSH and how does it works?

SSH is a client-server based protocol. This means the protocol allows a device requesting information or services (the client) to connect to another device (the server). When a client connects to a server over SSH, the machine can be controlled like a local computer.

What is SSL/TLS and how does it works?

Transport Layer Security (TLS) is the successor protocol to SSL. Meaning it was created years after when SSL was created and the two protocols know work as one though one is the update of the other. TLS is an improved version of SSL. It works in much the same way as the SSL, using encryption to protect the transfer of data and information.

When a web browser (or client) directs to a secured website, the website server shares its TLS/SSL certificate and its public key with the client to establish a secure connection (handshake between browser and website) and a unique session key. Server and browser now encrypt all transmitted data with the session key. This protocol is represented on web browsers by the bold lock in the address bar which is sign of secure connection.

HTTP Injector uses this equally for establishing secure connection between you the client and the server. You will always see in the log section a section with handshake allocated to it.

What is V2Ray and how does it works?

V2Ray is a set of tools to help you build your own privacy network over internet. V2Ray supports multiple protocols, including Socks, HTTP, Shadowsocks, VMess etc. Each protocol may have its own transport, such as TCP, mKCP, WebSocket etc.

Upon supporting all these protocol types, V2Ray is usually slow for connections and provides secured connections equally due to its multi support and this equally depends on the way you set up your V2Ray. This is also used in HTTP Injector for use.

What is Shadowsocks and how does it works?

Shadowsocks works just the same way like a VPN by rerouting a user's internet data sent by the computer or smartphone to a remote server in an uncensored country, which is called a Shadowsocks server, only then will it connect to the wider internet, as a result, the user can browse the internet content accessible from that country.

Shadowsocks is frequently used by many config developers and advanced users to easily access a restricted connection over a highly encrypted server. This encryption usually make the server to be heavy loaded and Thus, rendering the connection slow. This is the case with most HTTP Injector configs running with this tunnel type.

As earlier discussed, a server is to be considered when creating an ehi config with HTTP Injector. This server usually orientate and direct the settings of the ehi config, to which server its connection is to be encrypted for secure access by client.

We have classified the below top 5 servers for best results in speed and stability with the tunnel type servers that they support allocated to it and to consider when creating your HTTP Injector ehi config file or HA Tunnel Plus config file.

Below is a detail list of tunnel types these servers support.

Well there is no big deal in this. You can choose any of the above servers and create your SSH account. Alternatively, if you don't know how to proceed with the account video, watch the below video with detailed steps on how to create an ssh account successfully for http injector ehi config file.

HTTP Injector Servers and Custom Servers Which is Better to Use?

HTTP Injector servers that are integrated into the app are usually good to use. Plus, these servers connection details are being displayed in the app which make it suitable for usage and easy to choose for defined projects.

The greatest limitation on http injector servers is that, they do not allow the clients to do torrenting. If you try to do torrenting with their servers, they will surely disconnect you. This is not a really good news for those who love streaming and downloading torrents. So consider this before heading in for. Meanwhile, a custom SSH Server that supports torrenting will give us all these advantages.

To answer the question, I will rather say a custom server is better because there, we have full control and the freedom to use a torrent server without issues.

We have listed above the top 5 best servers you can use to create an http injector ehi config file with fast and stable speed. We classified these servers based on their support for tunnel types and connection methods they support.

Feel free to use any of your choice and try them out then let us know in the comment section your opinion on this servers.

Watch full video on this now!!!

Graphic Designer, Web Developer, Ethical Hacker, Programmer, Content Creator is what I am and over all a Biochemist with an aim of bypassing all restrictions that separate me from my objectives.
#Essential Tutorials #Free Internet Tricks #HA Tunnel Plus