How to Setup Your Freedom VPN Connection on iPhone and iPad

We will be using a method that is not really often if you are using an iOS device because Your Freedom doesn’t have any iOS client. Let’s set it up be

Your Freedom VPN is used to connect to networks with set of restrictions known to block users access to the internet by the use of some firewall protocols. Your Freedom VPN as many other VPNs is known for its tunnel abilities and its power of bypassing a set of firewall restrictions set by ISP. 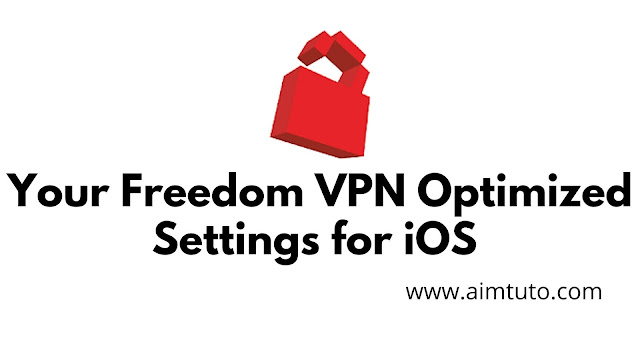 In today’s article, I will show you how to setup your Freedom VPN on iOS for browsing whether you are using an iPad or iPhone of any version, we will get through the adequate steps.

What is Your Freedom?

Your Freedom VPN with good configuration and settings get you connected to the internet for free.

Your Freedom clients are available only on Android and PC.

How does Your Freedom VPN works?

With well defined configuration and account, Your Freedom client redirects your local connection to the secured server you chose which later on encrypts the connection by masking your IP address on the internet making you undetectable for both your ISP and malicious guys online who are out to steal information.

Your Freedom VPN covers a wide range of servers which are very fast in getting you connected to the internet in no time. You just need a premium account and good settings for your ISP and you will be good to go.

It’s to be equally precise that several ISP have blocked access to their databases with the use of certain protocols with which Your Freedom VPN runs with so make sure you try as many ISP in your country as possible.

As we all know, Your Freedom VPN doesn’t have a VPN client on iOS devices. The clients are available just on Android and PC. So we will be doing some little tweaking on our iOS devices

We will be using a method that is not really often if you are using an iOS device because Your Freedom doesn’t have any iOS client.

You should not that every VPN be it on Android or iOS or any other platform creates its profile in the system settings where they run their services from your device.

So the application facilitates this creation in an automatic manner. So since this application isn’t available on iOS to configure our device automatically, we will need to do it manually by ourselves. Let me guide you through the steps.

We will be using a connection mode known as PPTP which is available on almost all devices including iOS devices.

What is PPTP ? Why should I Use it?

You should note that before all the best way to use Your freedom services is through the their clients software. This lets you do things which you can normally not do with many other VPN software. But you should also know that this connection mode isn’t very secure and you should use it when no one spies you online.

The Your Freedom VPN servers can now accept PPTP connections.

PPTP is a VPN tunnel protocol developed by Microsoft and redesigned by some other companies not renowned for designing good protocols. PPTP is not perfect in design for many aspects. Though the fact of not being secure for safe connection, PPTP has an advantage become it is widely distributed and can be accepted on several platforms such as Android Smart phones, nearly every PC, without any additional software which we will be experiencing today.

Unlike well designed protocols such as OpenVPN, PPTP uses a combination of TCP for its control over connections and GRE encapsulated PPP frames for carrying or transporting the data.

Nevertheless, PPTP is a widely spread and standard protocol and can relatively secure if properly configured then it gets the job done.

The Your Freedom Standard PPTP servers are

The de, uk, us, se, ch represent the countries of the servers.

Though these are the PPTP servers for connection using the PPTP protocol, when it comes to iPad or iPhone, the servers wouldn’t be the same as displayed above. So you will use the server type given in the steps below.

Not big material is required for this process, all you need is

The steps are really simple and you don’t need any basic skill to go on and get the job done. Just follow the steps below

Step 1: On your Home Screen, go to Settings >> General >> VPN to open the VPN tab as indicated in the screenshot below. 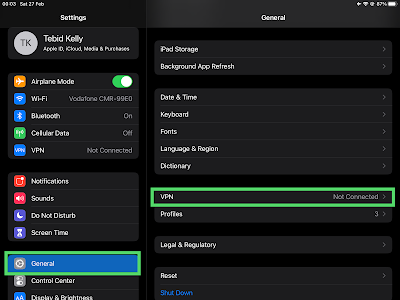 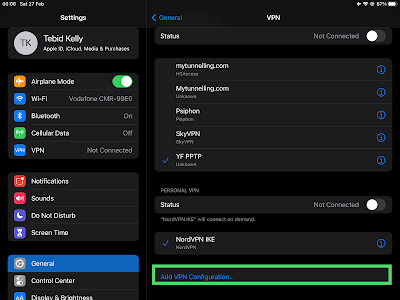 Step 3: You will be shown a pop up with fields required to be filled. view the image below. 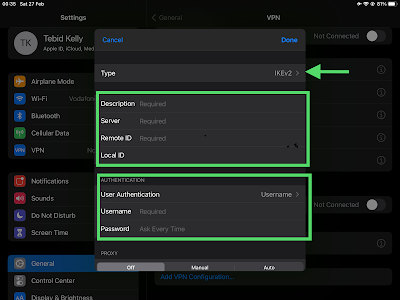 Step 4: Now let’s setup the Your Freedom VPN settings on our iOS device. 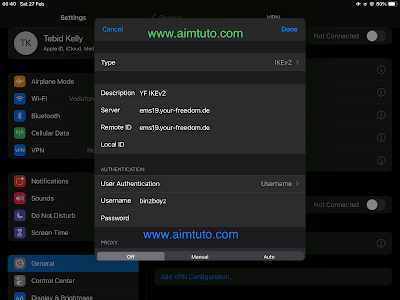 Step 5: Now click on the toggle bar in on the top list to connect to the VPN. Make sure you tick the newly created VPN configuration you just made and after some time you will get connected. 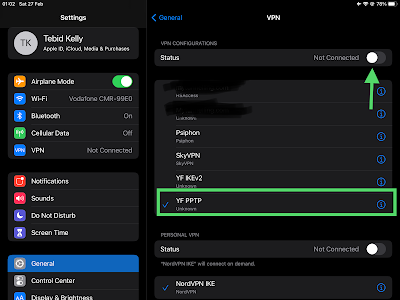 Important: The PPTP protocol will give good results as compared to the IKEv2 Since PPTP is a stable version of the protocol to be ran. So if your iOS device has PPTP mode, then you are good to go, but also IKEv2 is good equally gives good results though after some considerable amount of trials before successful connection.

Graphic Designer, Web Developer, Ethical Hacker, Programmer, Content Creator is what I am and over all a Biochemist with an aim of bypassing all restrictions that separate me from my objectives.
#Essential Tutorials #Your Freedom Tricks